↓ Skip to Main Content
Home › NoHo › A Preservation Pioneer at 100

A Preservation Pioneer at 100 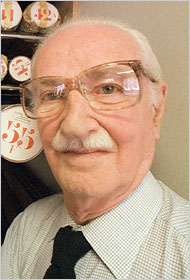 It’s hard to imagine New York without these two landmarks today, but were it not for the work and efforts of Cavaglieri and preservationists like Margot Gayle, endangered buildings such as these would have been lost forever — further casualties in the wake of the destruction of Penn Station in 1963 which galvanized New York’s preservation movement.

You can read the article HERE.

Interestingly, the piece makes note of Cavaglieri’s northern Italian roots, and its influence on his architectural sensibilities.  Coincidentally or not, both the Jefferson Market Library/Courthouse and the Public Theater/Astor Library drew on styles rooted in northern Italy — the former strongly borrows from Venetian Gothic models, while the latter is influenced by the Rundbogenstil, which is rooted in Northern Italian Romanesque design.  You can read more about each in their respective designation reports, available in the Designation Reports section on GVSHP’s Resources page — the Public Theater/Astor Library HERE and the Jefferson Market Courthouse/Library HERE and HERE.

The article is timely not just because of the anniversary of Cavaglieri’s birth, but because both the Jefferson Market Library and Public Theater are undergoing major renovations now — both are enshrouded in scaffolding, but should re-emerge renewed soon.

Learn more about some of our great preservation pioneers HERE and HERE.

Andrew Berman has been the Executive Director of Village Preservation since 2002.

0 comments on “A Preservation Pioneer at 100”

2 Pings/Trackbacks for "A Preservation Pioneer at 100"