Sam MoskowitzPosted on September 18, 2015 Posted in NoHo, Uncategorized — No Comments ↓

As part of NYCLandmarks50, the celebration of this year’s 50th Anniversary of the NYC Landmarks Law, we are taking a look at some of the many and varied individual landmarks in our neighborhood. The building complex now known as Colonnade Row, first named LaGrange Terrace, was one of the first properties landmarked under the Landmarks Law in 1965. It was added to the National Register of Historic Places in 1976. There were originally nine two-story buildings built in the neoclassical Greek-Revival style. Five of the buildings were demolished in 1901. Four of the buildings remain.

John Jacob Astor purchased the land on which the buildings were located in 1804 and leased the property to Vauxhall Gardens through 1826. He then developed the site including the nine-building LaGrange Terrace, the Astor Library (now housing The Public Theater), and Lafayette Street itself. At the time of development the neighborhood was one of the City’s most fashionable districts and remained so for several decades following the completion of the buildings. According to the State and National Register Report, “When it was completed in 1833, Colonnade Row was surrounded by fields.”

Astor’s project honored and capitalized upon the Marquis de Lafayette name, following his popular victory tour of America in 1825 to recognize his role in the American Revolution 50 years earlier. LaGrange Terrace takes its name from Lafayette’s estate in France, the Château de la Grange-Bléneau. They were one of the earliest buildings in NYC with indoor plumbing including hot and cold running water and toilets.

According to their LPC designation report, 424-438 Lafayette Street was the home to many influential Americans including the Vanderbilts, Astors, Gardiners, the wife of President Tyler (who hosted their post-wedding breakfast there), FDR’s grandfather, and Edward Morgan, former NYS Governor. According to the Colonnade Row Blog, “members from the original cast of Hair in 1967 lived here while they did the play at the Public Theater across the street.” and “As one of the original perks during the initial sale of La Grange Terrace, buyers received free horse stables located on 9th Street between 3rd and 4th Avenues.”  The Astor Theater, located in the building, was the original location for the three-man Blue Man Group, and continues to house the performance there. 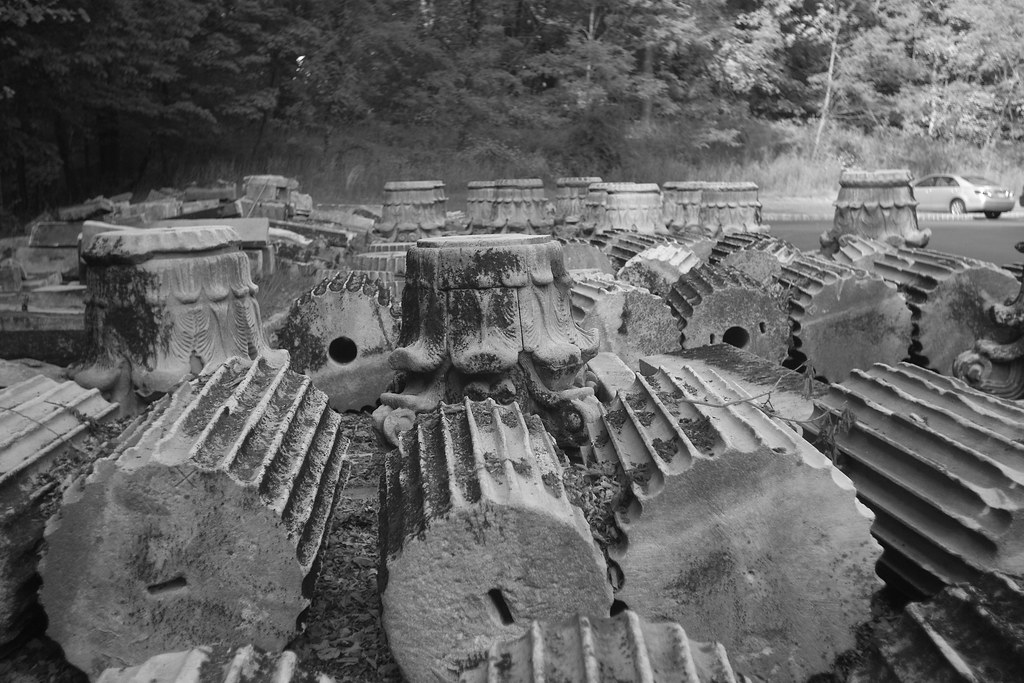 Columns from some of the demolished buildings were reportedly found in a parking lot at Delbarton Academy, a Benedictine boys school in Morristown, NJ. This site was formerly the estate of Luther Kountze, who acquired the columns, most likely for another project, but never utilized them. He may have realized, as anyone who has walked by Colonnade Row recently, that the building materials have deteriorated over time. Unfortunately, the building is in various states of disrepair.  In 1923, Princeton architectural student, E. James Gambaroit noted that “the marble is disintegrating very rapidly, and portions have been covered with a plaster coat of cement, applied without any regard for the original motives.” Heavy canvas and wire mesh now cover the columns and parts of the facade, preventing their disintegration from harming passersby. Although there is currently a protective scaffolding in front of the building, there are no public plans for the expensive renovation needed to return the buildings to their original grandeur. According to DOB permits the work being conducted includes mechancial, HVAC, plumbing, and boiler repairs, and has nothing to do with the restoration of the facade.