Saving the One-Time Home of Polo Ponies, Rosie the Riveter, and Minimalist Masterpieces

Sam MoskowitzPosted on May 15, 2017 Posted in East Village, Uncategorized — No Comments ↓

This is one of the rare cases where a great building was saved literally as it faced the wrecking ball.  In 2006, plans were released to demolish the property and build seven story condo.  GVSHP immediately urged the LPC to hold an emergency hearing, providing the Commission with voluminous research documenting the building’s extraordinary history.  Thankfully, the Commission did, and demolition plans for the building were halted. Few buildings in New York could be said to have had such a distinguished history, intersecting with so many key phases of our city’s development and transformation.

GVSHP created a campaign based upon “Rosie the Riveter,” the WWII image of female assembly-line workers, to save the building which once housed a training center for such women during the war.

This building is believed to be the last surviving horse and carriage auction mart building in NYC. Built as the Van Tassell & Kearney Auction Mart at a time when the city was home to over 75,000 horses, the building is a great example of adaptive reuse. It served as a horse auction house for its first decade, then an auto garage, candy manufacturer, and vocational school/machine shop.

According to the New York Times, during World War II women were taught “assembly and inspection work, the reading of blueprints, and various mechanical aspects needed in defense industries.” From 1978-2005, the building was owned by Frank Stella, one of the 20th century’s most notable and influential artists, who used it as his studio. The building now serves as the home of Peridance Capezio Center, “New York’s premiere dance center”. 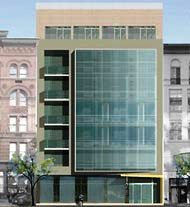 Without GVSHP, this is a sketch of the condo that would have replaced the historic Van Tassell and Kearney Horse Auction Mart. Image via Gothamist.

128 East 13th Street was built in 1903 by Jardine, Kent, and Jardine, one of the era’s most distinguished architectural firms. Van Tassell & Kearney were “auctioneers and commission merchants”. According to contemporary reports in the New York Times, in the mart’s early years “the Belmonts and the Vanderbilts and other families transacted their horse affairs” there. According to the designation report, Edward Kearney was born in Manhattan, worked for many years as a butcher, and served as a soldier in the Eighth New York Infantry during the Civil War. A member of Tammany Hall, he had social and political ties to the Democratic Party and, by providing meat to city institutions, “accumulated a large fortune” which he invested in real estate and the auction business. Van Tassel was born in Manhattan and worked for the White Stage Line, supervising daily coaches between New York and Albany, and later, the Broadway and Seventh Avenue car lines. The firm’s namesakes both died by 1903, and the building was constructed by Kearney’s son, Edward W. Kearney.

It took six long years between the initial hearing for landmark designation and the Commission finally voting to designate the building, during which time GVSHP continued to push for a final vote to protect the building.