Beyond The Village and Back: Gould Library & Begrisch Hall

In our new series Beyond the Village and Back, we’ll take a look at some great landmarks throughout New York City outside of the Village, the East Village, and NoHo, celebrate their special histories, and reveal their (sometimes hidden) connections to the Village.

For our first post in this series, we would like to highlight a pair of important and often overlooked landmarks. The Gould Memorial Library and Begrisch Hall are both located in a dramatic hilltop setting on the campus of Bronx Community College in the University Heights section of the Bronx. The Gould Memorial Library and the attached Hall of Fame of Great Americans is a spectacular neo-classical structure designed by one of 19th century America’s greatest architects and designated an exterior landmark in 1966 and an interior landmark in 1981. The Brutalist style Begrisch Hall is one of the boldest examples of that striking and sometimes not-so-loved architectural styles, designed by one of the 20th century’s great architects and landmarked in 2002.

Gould Hall on the BCC campus

According to the 1966 designation report, “The Gould Memorial Library, located centrally inside the sweeping curve of the Hall of Fame, is an imposing example of the Eclectic Roman Style of architecture. It ranks as one of the fine works in the Classic tradition in this country. This large rectangular, domed building has an impressive portico with Corinthian columns on the campus side. The other three facades have Corinthian pilasters of limestone set against walls of Roman brick. Windows are appropriately set between the pilasters. Together these elements create a beautiful structure with fine architectural details. The importance of this notable building lies in its achievement of great Classical dignity and monumental grandeur.”  The building was completed in 1900 and designed by Stanford White of the firm of McKim, Mead, and White, which also designed Columbia University and Penn Station, among many other great New York City landmarks.

The spectacular ceiling of Gould Hall

The library was inspired by Thomas Jefferson’s University of Virginia Library. The interior, designed by Tiffany Studios, is richly detailed in marble, stone, mosaic, wood, bronze, and Tiffany glass. It features a rotunda with Greek sculptures and a coffered dome. The landmark includes the first Hall of Fame in the country, which encircles the Gould Library, and was recently in the news for removing busts of Stonewall Jackon and Robert E. Lee. Unfortunately, the building fell into disuse as a library following a 1969 firebombing, and in 2016 was named to the Preservation League of New York State’s 2016-17 Seven to Save Endangered Properties List. (If you’re a fan of the movie ‘Sophie’s Choice,’ you might recognize the spectacular and imposing interior space from the flashback scene in which Meryl Streep’s Sophie Zawistowski collapses after being scolded by a stern librarian for mispronouncing the name of the poet Emily Dickinson.) 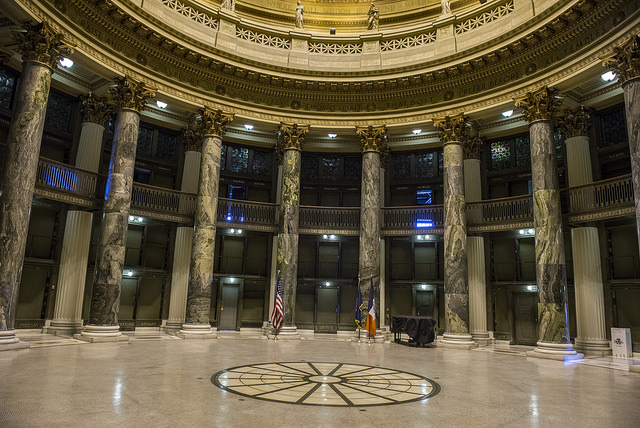 The campus is also home to another designated New York City landmark, one which is imposing in a very different way. The brutalist-style Begrisch Hall was built in the late 1950s and completed in 1961. It was designed by Marcel Breuer, one of the mid-twentieth century’s leading architects. Breuer later went on to design the Whitney Museum of American Art on the Upper East Side.

According to a history of the campus “Begrisch Hall, completed in 1961, is perhaps Breuer’s most revered and daring building at the Heights. With its trapezoid shape, short legs, and sloped cantilevers, it looks closer to a piece of abstract sculpture as opposed to a lecture hall. At the time, it housed two halls equipped with state of the art electronics including epidiascopes or opaque projectors, slide projectors and closed circuit televisions that the administration believed would replace the everyday chalkboard. The building is linked to the second floor of the five-story Gould Hall of Technology, also designed by Breuer.  On March 16, 1964, Breuer won the City Club Award for Begrisch Hall for its “vigorous, imaginative, and highly sculptural expression of the possibilities of reinforced concrete.”

While these two buildings might seem as far apart in look and style as imaginable, Breuer actually tried to create some relationship between them. The concrete used in Breuer’s brutalist (from the French “beton brut,” meaning “raw concrete”) design was chosen to match the straw-colored stone of Stanford White’s Gould Library.

So what do these two very different but geographically proximate landmarks have to do with the Village?

While they have been owned by the City University of New York (of which Bronx Community College is a part) for the past four decades, they were actually built as part of the uptown campus of Greenwich Village’s New York University.  New York University was founded in 1831, and for the next 75 years occupied a variety of buildings east of Washington Square Park. Appointed in 1891, Chancellor Henry Mitchell MacCracken led a reorganization of the school away from the crowded streets of the Village to a sprawling rural campus, with the idea that the eighteen-acre site, purchased in large part by wealthy railroad tycoon Jay Gould from the Mali estate, “would fulfill more nearly the American ideal of a college.” Stanford White, a leading architect of the time, consulted on the reorganization and initially suggested that the school’s original Gothic-Revival building, built 1833-36, should be taken down and reassembled on the new NYU Bronx campus. This plan was scrapped due to cost and the building was torn down and replaced by the Main Building, now known as the Silver Center. However, McKim, Mead & White was hired to design the new campus.

The 18-acre site was expanded over the years to over 45 acres and sits on the highest hilltop in the Bronx, overlooking the Harlem River. The area was known as Fordham Heights during the late 18th century and retained its rural character throughout most of the 19th century. Several country estates were located on the school’s present site, and three extant mid-late 19th-century houses built for Gustav Schwab, William Henry Mali, and Loring Andrews were incorporated as part of the college.

While NYU is one of the most sought-after schools in the country today, in 1973 NYU was facing decreasing enrollment and financial distress. NYU was forced to sell their Bronx campus to the city for around $62 million. This decision would have wide-ranging consequences, the effects of which continue to reverberate through our neighborhoods. It meant the closure of NYU’s School of Engineering and Science, a widely-decried decision that was only rectified 40 years later when NYU purchased Polytech. It also meant the school would focus all of its growth in one location, Greenwich Village, where space constraints would drive NYU to acquire more and more property for dorms and classrooms as the school transformed from a commuter to a residential school from the 1980s onward.

Now long separated from NYU, Bronx Community College serves over 11,000 students from over 100 countries each year, offering over 30 academic programs that prepare students for careers and to continue their education at four-year colleges. In October 2012, the campus was declared a National Historic Landmark, becoming the country’s first community college campus to receive such a designation. Tours of the landmarks are available — contact BCC for information. One comment on “Beyond The Village and Back: Gould Library & Begrisch Hall”