Sam MoskowitzPosted on July 30, 2018 Posted in Gansevoort Market — No Comments ↓

Last week we shared an online Historic Bowery Walking Tour. This week we are sharing a walking tour of the Gansevoort Market Historic District, landmarked in 2003 thanks to efforts by GVSHP. Back in 2002 GVSHP wrote: “Gansevoort Market is one of Manhattan’s defining neighborhoods – gritty, hard-working, low-rise, with its own special character, and a rich collection of buildings and history that cannot be replaced.” Since 2002 much of the grittiness has been replaced with luxury. The High Line has transformed from abandoned to desirable. The world-renowned Whitney Museum of American Art has replaced blue-collar meatpackers.

But thanks to landmarking the rich collection of buildings still define the area and remain (mostly) low-rise. According to the designation report, most were built between the 1840s and 1940s. There is a wide representation of both purpose-built structures designed in then-fashionable styles, and those later adapted for market use. The architecture of the district tells the story of an important era in New York City’s history when it became the financial center of the country and when its markets were expanding to serve the metropolitan region and beyond.

Our tour begins at No.’s 3, 5, 7 Ninth Avenue. Among the oldest buildings in the Gansevoort Market are these three much-altered row houses. Built in 1848-49, they sit on land that was owned for more than a century by the family of merchant John G. Wendel. A hint of the building’s original elegance survives in the patterned cast-iron designs at the bottom of the areaway railing on the right of No. 5. As the market area developed around the houses, they were turned to commercial uses. No. 3 is just a fragment of its former self, having lost its southern third in an 1887 widening of Gansevoort Street. In 1897, No. 7 was converted to a hotel, with a ground floor saloon.

This four street intersection of Ninth Avenue, Greenwich Street, Little West 12th Street and Gansevoort Street is paved in old Belgian blocks. This wide plaza is unique for New York. The large area of the original Gansevoort vegetable market that once existed a block to the west is now built up, but the intersection here gives some hint of what it might have been like – a broad, empty area jammed with overflowing produce carts and thousands of shoppers. Look around and you will see one of New York’s quirkiest, and perhaps most evocative, historic commercial landscapes. Greek Revival houses opposite early 20th century warehouses.

Just north, the building 9-19 Ninth Avenue began life as a row of six three-story stables and stores. In 1922, they were reduced to two stories for the estate of Vincent Astor. This was not an uncommon occurrence in the market district, where two-story buildings were apparently the most useful. Previously home to Pastis, a ridiculous noncontextual two-story glass addition was approved for this building in 2015.

Across Ninth Avenue, the Astor estate also built the elegant six-story warehouse at Nos. 2-8 Ninth Avenue. When built in 1913 by William Vincent Astor, the address was 5 Little West 12th Street. From 1913-1922 it served as a warehouse for the provisions firm of C. Percival, which was established in 1868. Attached to 1 Little West 12th, it was then owned by Ottman & Co. for use as a packaging and processing plant, with storage on one floor, and butchering and packaging on other floors. Read more about the history of this building here.

The five-story building at 53-61 Gansevoort Street dates to 1887 and was designed by architect Joseph M. Dunn (who was responsible for many of the area’s late-19th-century warehouses) for the Goelet family, a major 19th century New York property owner. Built as a factory for wholesale grocers, the building later housed the New England Biscuit Company. Still visible today are the ground-floor cast-iron columns with their neo-Grec ornament and imaginative floral capitals. The building’s narrow corner results from its odd triangular site. Its round edge caught the eye of photographer Berenice Abbot, who included it in her 1936 photo-essay, Changing New York.

From the GVSHP Image Archive, April, 2006

Thomas McGeehan, a market worker whose father, grandfather and great-grandfather all worked in and around the Gansevoort market, remembers life growing up in the neighborhood: “The majority of people in this area depended on the waterfront. The men worked on the waterfront as longshoremen. Also the Gansevoort Market, they were what they call teamsters, with horse and buggy drivers. In those days my grandfather drove one, he was a teamster. My father worked on the piers, he was a longshoreman.” McGeehan remembers the “R and L” restaurant, at No. 69 Gansevoort Street, that until several years ago was the location of Restaurant Florent and is now an upscale retail shop: “We used to call it the Eatem’ and Beatem’, because we used to go there at 3 o’clock in the morning, and eat our eggs and beat it out the door. And it was very popular because it was open 24 hours a day. So, I don’t know what time the bars were open to, maybe 4 o’clock. And when they fell out of the bar, they’d run to the R and L and have their breakfast, sleep for an hour or so, then run down to the pier to continue on.” 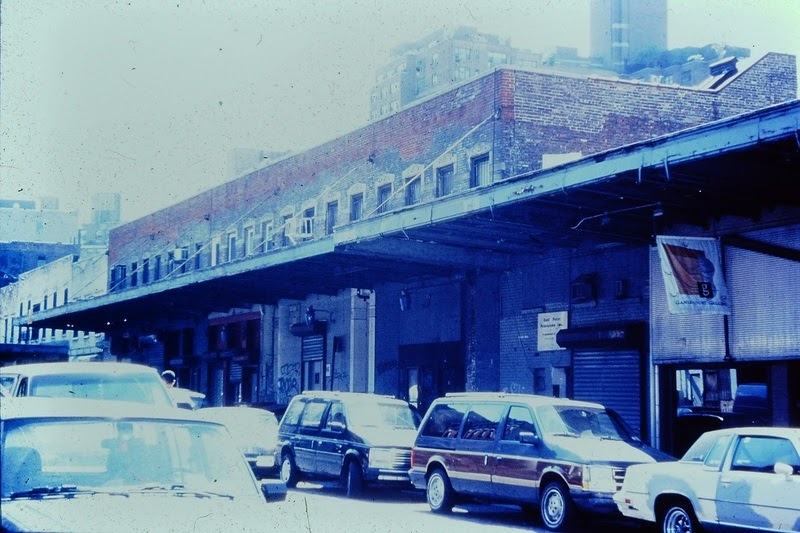 799-801 Washington Street, at the corner of Horatio, was built in 1910 as a warehouse. By the mid-1940s a paper and twine company called it home, as did more recently a marine supply firm and a film production facility including studios and a screening room. The building’s detail is simple, but carefully thought out. The window lintels and the band courses above the first and fifth stories are made of rusticated granite – an architectural conceit meant to suggest sturdiness. Look at those band courses, and notice how the five courses of brickwork below them gradually project to form a ridge supporting the granite. The square-headed windows at the first through fourth stories turn round-arched at the fifth floor, while three-dimensional geometric brick patterns are set over the sixth-story windows, and the whole is topped by a heavy, imposing cornice.

Nos. 105-107 and 109-111 Horatio Street were once part of the Gansevoort Freezing and Cold Storage Company, an enormous cold storage facility operated by the Manhattan Refrigerating Company. The company at one time owned or leased the entire block. All the warehouses were internally joined and shared a system that carried brine-cooled water in iron pipes beneath West Street to the West Washington Market, to aid in meat and poultry preservation. 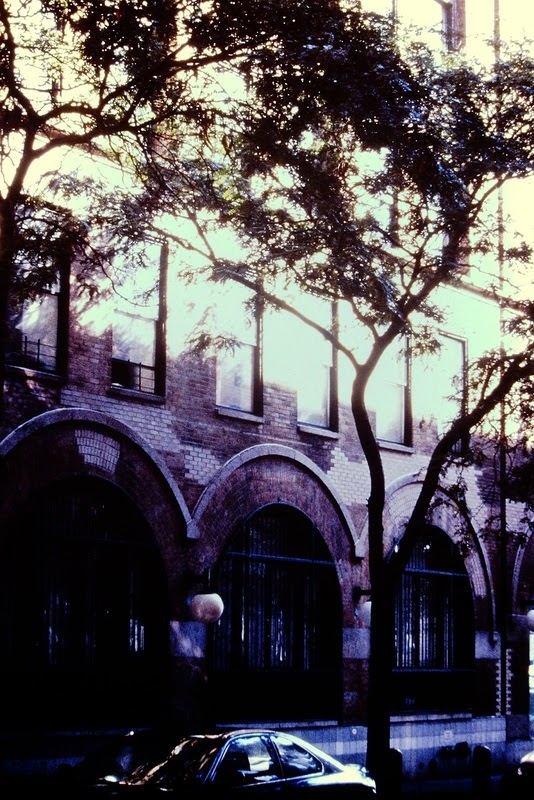 Our final stop is now the site of the Whitney Museum of American Art. Built on this site from 1906-08, the Gansevoort Pumping Station supplied high-pressure water for fighting fires. In 1949, it became a cold storage meat warehouse, part of the City-sponsored Gansevoort Market Meat Center. In the 1990s it was home to the Premier Veal & Lamb Company. Its Tenth Avenue front was adorned with colorful murals of contented cows munching on grass in the countryside. Had you been standing here during the late 19th century or the first half of the 20th, you’d have found yourself in the middle of two of New York City’s most chaotic market scenes. To the east, the block bounded by West and Washington, and Gansevoort and Little West 12th streets, was the enormous open area that housed the original Gansevoort Farmer’s Market. Across West Street stood the West Washington Market. Prior to that, the intersection of Gansevoort and Washinton Streets was the site of Fort Gansevoort, built in 1812 and demolished in either 1849 or 1854. 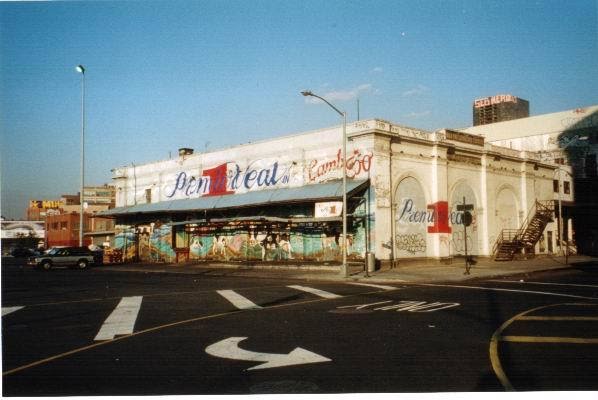 Gansevoort Pumphouse at Gansevoort Street and Washington Street. Now the location of the Whitney Museum. From the GVSHP Image Archive. Ca 2000