Sarah Jessica Parker holding up a #ShopBleecker postcard last year. This is now an annual initiative.

Four years ago today, GVSHP launched our Business of the Month program, in which each month a local independent business is featured on GVSHP’s website and blog Off the Grid, and shared with thousands of followers via our e-bulletins and social media, showcasing one of the great retail treasures of the Village, East Village, or NoHo.  It’s also #ShopBleecker month.  To mark this anniversary and important event, today we’re looking back at some of our Business of the Month awardees and Village Award winners located on Bleecker Street.

These days it seems you can’t miss Murray’s Cheese, the well-known South Village shop devoted to all things cheese. It’s been featured in the New York Times and the food blog Eater, all for what Villagers have known for a long time: Murray’s is a true Village treasure. GVSHP awarded the shop a Village Award in 2000 – when the store was located across the street at 257 Bleecker, back before they had cheese caves, classes, and all the good press. At the time, Rob Kaufelt, Murray’s Cheese’s owner, chatted with GVSHP:

Murray’s Cheese has been in business since 1940, and you have owned the store since 1991, moving it from Cornelia, then from one side of Bleecker Street to the other. If you had to pick just one thing, what do you think is the biggest difference between the store now and when Louis Tudda owned it? What is most similar?  Louis bought the store from Murray (he died before I moved here so I never met him). It was the classic American tale: the Jewish immigrant sold to the Italian immigrant! The neighborhood was still very much the old neighborhood from what I heard. I learned a lot from the Zito brothers a couple of doors down about the history of our block – how it was always a food street. So though I was the new kid, I respected that tradition. We still have Rocco’s and Ottomanelli’s and Faicco’s, but the neighborhood is changing. Murray’s is just keeping pace with the times.

Porto Rico has been owned and operated by the Longo family and serving coffees since 1907.  Long-time residents of the South Village on Bleecker Street, Porto Rico has also revamped their location on St. Mark’s Place in the East Village.   In 2007, GVSHP honored Porto Rico with a Village Award and, in 2015, we released an oral history with Peter Longo, the current owner and operator of the establishment.  Whether it’s coffee beans or coffee in a cup, chocolate covered espresso beans, mugs, or filters: they have it all for the coffee lover.

The holiday season is a time for family, treats, and lots of sweets, and what better way to immerse yourself in the holiday spirit than with one of Greenwich Village’s own chocolate houses.  Li-Lac Chocolates, one of Manhattan’s oldest chocolatiers, has been a Greenwich Village staple for over 90 years.  Founded in 1923, the first Li-Lac was started by a Greek immigrant named George Demetrious at 120 Christopher Street.  Mr. Demetrious had previously learned the art of chocolate making in France, and used his expertise and innovation to develop a loyal following within the Village.

According to the Li-Lac Chocolate website:  “During the 1920s, Greenwich Village was a destination for artists, intellectuals and innovators. It was in this context that Mr. Demetrious applied his chocolate-making expertise, creating and perfecting his recipes for such items as Almond Bark, Butter Crunch, Hazelnut Truffle Squares, Legendary Fudge, and other favorites; steadily building a loyal customer following among his quirky and demanding neighbors.” 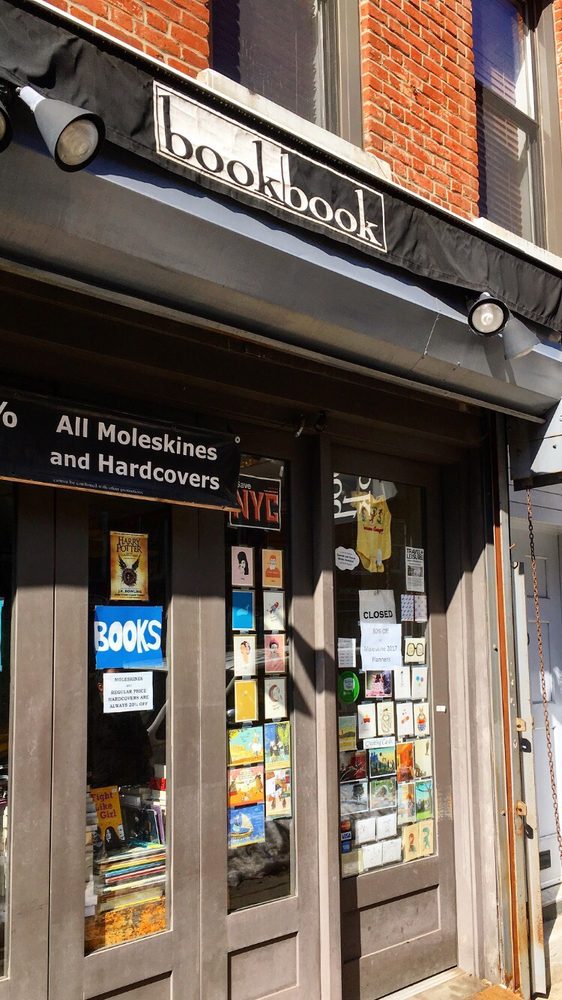 Some of you may remember Biography bookshop, across from Magnolia Bakery on the corner of Bleecker and West 11th streets. It was small and inviting, with a discount table outside stacked with books so appealing you couldn’t believe they were remainders.

Although that corner was eventually claimed by Marc Jacobs, Biography didn’t really go away. It just moved down Bleecker Street and changed its name to bookbook. Same owners, similar stock, same wonderful discount table out front – and even a little more room inside.

Owners Carolyn Epstein and Chuck Mullin have been partners in life and business for over 35 years. They’re both New York City natives with ink in their veins – Mullin’s mother ran a bookstore, and Epstein’s father was a book distributor; the pair met while both working for her father. They make their home on Jane Street, where they’ve resided for over two decades.

Bleecker Street in Greenwich Village has always been at the center of the music world — a home for musicians, performance venues, and music stores. Many beloved record shops have come and gone, but for over 30 years Village Music World at 197 Bleecker Street is still spinning.

The business of selling music has always been heavily impacted by technology. From the evolving formats of records, 8 tracks, cassettes, CDs and digital downloads, a store must be nimble to stay relevant.  One of the proprietors of Village Music World, Jamal Jararah, said “It used to be in the 90s if you had a vinyl collection you were a weirdo.” And for a time they did not even sell records. Now the resurgent interest in vinyl has helped to keep many a music shop afloat.  But they sell more than just records at Village Music World.

Need a bag of any kind? Or a wallet, pouch or belt?  One business on Bleecker Street surely has just what you need, or they will custom make what you want.  And with a name like Village Tannery, you won’t be surprised to know they have been around for 45 years and their method of work is still very “primitive,” as partner/owner Semih Tokat says from behind the counter.

In the small atelier or workshop in the back of their sleek “museum” of a shop, you’ll notice they don’t use computer drafting or design.  Instead, they have a library of cardboard blank forms for their unique products that they use to guide their cuts.  All the work is done by hand, including scraping the edge of the leather so it is thin enough for the needle to go through, then applying glue and stitching.  All of the leather they work with is domestically sourced, with some of it coming from upstate New York.  Read more about Village Tannery here.

#ShopBleecker is a month-long initiative seeking to revitalize businesses on and adjacent to Bleecker Street. Throughout the month, there will be exclusive deals, events, raffles and more! Learn more from the Greenwich Village & Chelsea Chamber of Commerce here.

Local businesses are the backbone of our neighborhoods, and many find themselves in an increasingly tough business environment. GVSHP is committed to supporting the places that help keep our neighborhoods unique by providing a special service, atmosphere, or product that can’t be found anywhere else.

Since 1980, the Greenwich Village Society for Historic Preservation has worked to preserve the architectural heritage and cultural history of Greenwich Village, the East Village, and NoHo. Through an array of efforts in education, preservation and advocacy, GVSHP is a leader in protecting the sense of place and human scale that define our one-of-a-kind neighborhoods. Learn more at www.gvshp.org.