Sam MoskowitzPosted on May 29, 2019 Posted in Uncategorized — No Comments ↓

Probably McDarrah's most iconic photo, this image of Robert F Kennedy was taken on May 8th, 1967 in the former Stanton Street tenement apartment of NYS Senator Jacob Javits.

On June 12th, 2019 we will be celebrating seven outstanding awardees at our Annual Village Awards — RSVP here. Read blog posts about each of our 2019 Village Awardees here.

Fred W. McDarrah was the primary (and often only) photographer for the Village Voice for decades, since the newspaper’s inception in 1955. He covered the Village counterculture, Gay Rights, Women’s Rights, the Vietnam War, Experimental Theater, and other movements centered around the Village because, as he noted, they were “The most colorful community of interesting people, fascinating places, and dynamic ideas.” 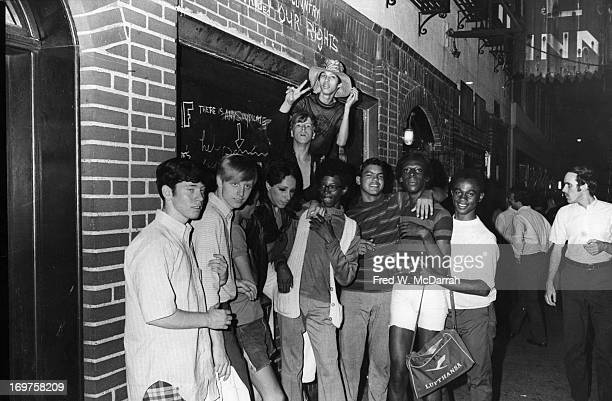 Fred and his wife Gloria spent their lives raising their family in the Village, participating in protests and working on historic preservation (Gloria worked for the Landmarks Commission as a publicist in 70s for seven years). Gloria is fiercely protective of the Village and believes the photographs can and should continue to educate and protect landmarks now and in the future. Gloria recently noted,  “I hope that the Greenwich Village Historic District gets enlarged. And I hope that the Village remains an entity; that it doesn’t just fade away.”

One of McDarrah’s most iconic photos, this image of Robert F. Kennedy was taken on May 8th, 1967 in the former Stanton Street tenement apartment of NYS Senator Jacob Javits. Image copyright Estate of Fred W. McDarrah.

Fred passed away in 2007 at the age of 81. Since then, the Estate has actively allowed photographs to be used for the cause of preservation. As Gloria states – an image is far more powerful than “just words.” Gloria donated all of her bound copies of the Village Voice to the NY Historical Society and she and her son Tim run “Save the Village” walking tours. Proceeds support historic preservation and worthy causes in the Village. Most of the recent charitable activities are Stonewall50 related. The official National Park Service brochure to be distributed by the NPS going forward at Stonewall National Monument at Christopher Park – created in collaboration with the NYC LGBT Historic Sites Project, National Parks Conservation Association, the New York Public Library, and GLSEN (all organizations the Estate has supported) – features donated use of the iconic Stonewall photo.

Gloria has said that people ask why there aren’t more photos. She pointed out that Fred had to pay for the chemicals and paper for his own work and they were expensive. Their personal time and money along with Fred’s great eye allow these private photos to exist and are still used to document and support the Village today.