Politics and rallies have always been an integral part of the DNA of Greenwich Village. One particularly significant rally of note took place on June 13, 1959.  Dubbed “Village Rallies for NAACP,” it took place in Washington Square Park, and among the speakers was Greenwich Village’s own Lorraine Hansberry.  Hansberry was the co-chair of the National Association for the Advancement of Colored People’s Life Membership Committee. The rally was intended to increase membership, raise funds, and start a Greenwich Village NAACP branch, with which Hansberry was intimately involved.

Lorraine Vivian Hansberry was born on May 19, 1930.  The trailblazing playwright, activist, and Nina Simone song inspiration was perhaps most closely associated with Chicago, but in fact she lived, went to school, and spent much of her life in Greenwich Village. Hansberry grew up on the segregated South Side of Chicago, the challenges of which she so memorably brought to life in her play “A Raisin In the Sun.”  Raisin was the first play written by a black woman to be performed on Broadway, and Hansberry was the youngest American and only the fifth woman to receive the New York Drama Circle Critic’s Award for Best Play.  (The Harlem Repertory Theater is offering a performance of the play this year.)

Lorraine Hansberry speaking at “Village Rallies for NAACP,” in Washington Square Park, June 13, 1959. Photographer unknown. Hansberry was the co-chair of the National Association for the Advancement of Colored People Life Membership Committee. The rally was to increase membership, raise funds, and to start a Greenwich Village NAACP branch. via http://lhlt.org/gallery/lorraine-hansberry-speaking-%E2%80%9Cvillage-rallies-naacp%E2%80%9D

Hanseberry attended the University of Wisconsin–Madison, but in 1950 left Madison to pursue her career as a writer in New York City.  She moved to Harlem in 1951 and became involved in local activist struggles such as the fight against evictions, while attending The New School in Greenwich Village.  Around this time she also joined the staff of the black newspaper Freedom, edited by Louis E. Burnham and published by Paul Robeson. There she also worked with W. E. B. Du Bois.

After the success of A Raisin in the Sun, Hansberry used her prominence in myriad ways: challenging President Kennedy and his brother to take bolder stances on civil rights, supporting African anti-colonial leaders, and confronting the romantic racism of the Beat poets and Village hipsters.

Hansberry’s first apartment was at 337 Bleecker Street (her apartment is above what is now a hat shop), where she lived from 1953 to 1960, before she bought and moved to 112 Waverly Place in 1960. GVSHP unveiled a historic plaque at 112 Waverly Place in celebration of Hansberry’s time there (you can learn more about our historic plaque program here). 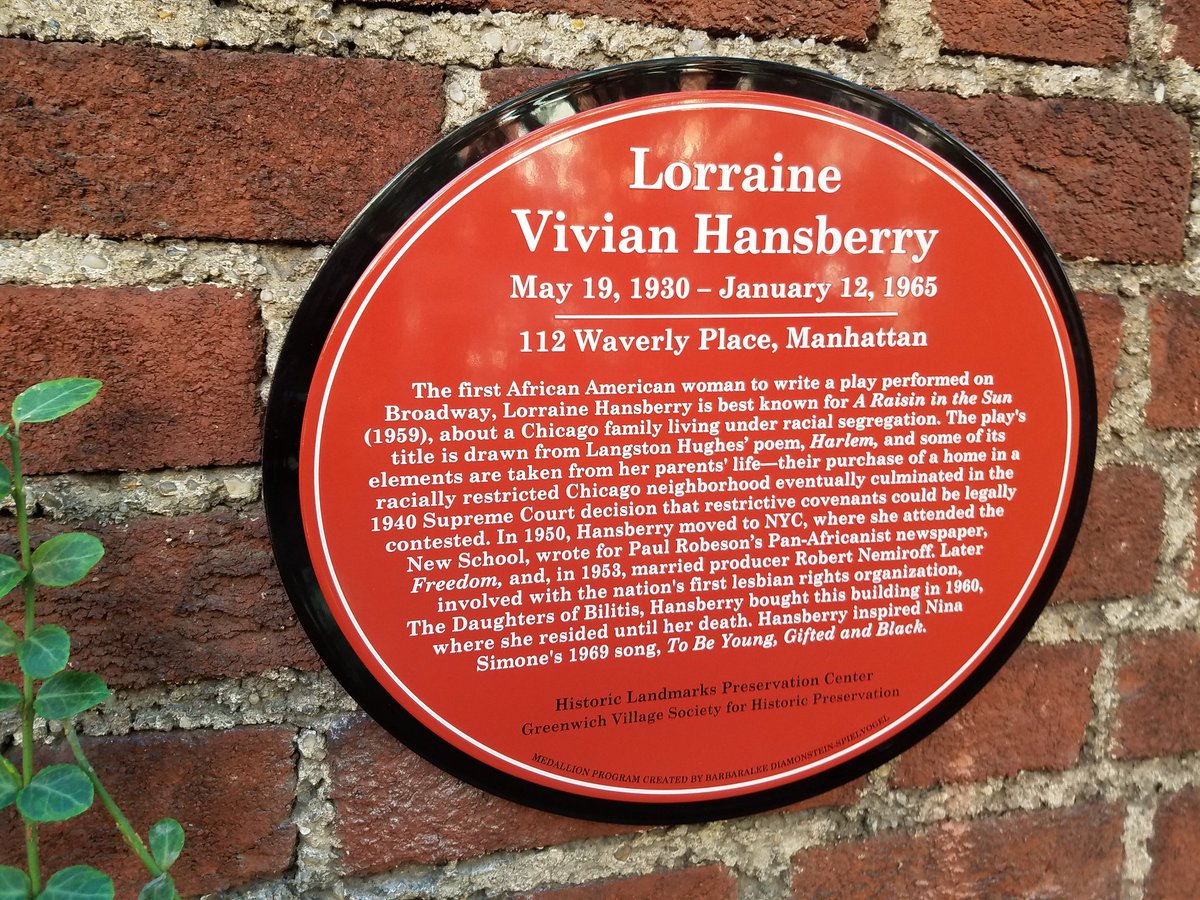 In 1953, she married Robert Nemiroff, and they moved to Greenwich Village.  This was the most successful period of her writing career, as it was while living in the Village that she wrote A Raisin in The Sun.  She and Nemiroff quietly separated in 1957 and divorced in 1964, though they remained close until her death in 1965 and he was the executor of her estate.  In later years it was revealed that Lorraine Hansberry was a lesbian, having written several anonymously published letters to the lesbian magazine ‘The Ladder” discussing her struggles as a closeted lesbian, and having joined the early lesbian group the Daughters of Bilitis.

Sadly, Hansberry died of pancreatic cancer at the age of just 34.  An activist to the very end, Hansberry’s close friend (and fellow Greenwich Village resident) James Baldwin said “it is not at all farfetched to suspect that what she saw contributed to the strain which killed her, for the effort to which Lorraine was dedicated is more than enough to kill a man,” referring to the various civil rights and social justice struggles with which Hansberry was engaged.  Her funeral was held in Harlem on January 15, 1965, at which Paul Robeson and Student Non-Violent Coordinating Committee (SNCC) organizer James Forman gave eulogies.

Lorraine Hansberry’s home, and that of many other pioneering women, African-American, and LGBT civil rights activists can be found on GVSHP’s Civil Rights and Social Justice Map. The NAACP has a long history in Greenwich Village, having been headquartered here for decades starting in the 1910s not long after its founding, during some of the most critical years of its existence; read more here.

One comment on “Village Rallies for NAACP, with Lorraine Hansberry”