Gem Spa: An 80 Year Old Institution Fighting for its Survival

New Yorkers love their small businesses, so it was no surprise that the plight of East Village mainstay Gem Spa drew so much attention and support from local residents and visitors alike.  The almost 80-year-old corner stand has always sold a plethora of handy items, from snacks to newspapers, drinks to hats, toiletries and sunglasses to fedoras.  But they have run into some challenges lately.  Gem Spa was taken over in 1985 by Ray Patel; due to health concerns, his daughter Parul has been keeping things going at Gem Spa lately.

Gem Spa has been a touchpoint in the East Village for everyone from anonymous locals to internationally-recognized creative luminaries.  Robert Mapplethorpe bought Patti Smith an egg cream there on the day they met. In her memoir “Just Kids” she wrote: “The sun had set over Avenue B. He took my hand and we wandered the East Village. He bought me an egg cream at Gem Spa, on the corner of St. Mark’s Place and Second Avenue. I did most of the talking. He just smiled and listened. I told him childhood stories, the first of many: of Stephanie, The Patch, and the square-dance hall across the road. I was surprised at how comfortable and open I felt with him. He told me later that he was tripping on acid.” 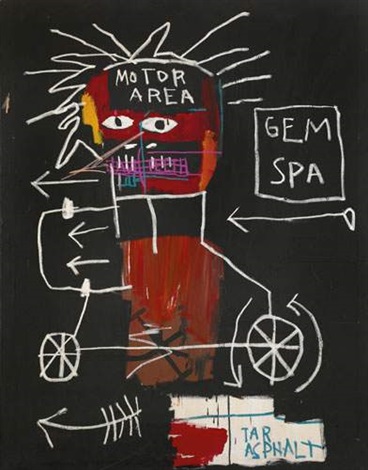 Gem Spa’s corner on the southwest side of the intersection of St. Mark’s Place and Second Avenue is also one of the most photographed in the East Village.  It’s on the back cover of the New York Dolls’ 1973 debut.  And the words Gem Spa feature in a 1982 work by Jean-Michel Basquait.    Village Preservation also has some great shots of it from the 1980s in our Carole Teller Collection of our Historic Image Archive.

According to Jeremiah’s Vanishing New York, there are rumors that a Citibank could open up if Gem Spa is forced out.  Sometimes a landlord seeks higher rent and has an incentive to oust longtime shops to make way for a more corporate client and anticipated higher rents.  One recent nearby example was the Nino’s Pizza on St. Mark’s Place and Avenue A which closed in October 2015.  As reported in EVGrieve, “owner Nino Camaj accepted a low six-figure amount to walk away from his remaining 10-year lease and surrender the pizza shop that he opened in 1989. He had been in a dispute with the landlord over back rent and a closure due to a gas leak in the building.” Later, Starbuck’s opened on that corner, which was met with a rally.

This is one of the reasons why Village Preservation has been part of the campaign with East Village Community Coalition and others to advocate for the creation of an East Village Special Zoning District to protect small businesses and discourage chain stores. You can read more about the proposal and send an email to local officials here.

Besides that, show your support for local stores and character by visiting and shopping there.  To encourage you, the latest Gem Spa creation is on their Instagram account. They have always been known for their egg creams; now in a further sign of changing times and expanding their appeal, they have launched a vegan egg cream. Ask for it, or the classic version, today.

6 comments on “Gem Spa: An 80 Year Old Institution Fighting for its Survival”