The East River Park’s Past and Future

In the 1930s, today’s East Village and Lower East Side, long the country’s most crowded and notorious slum, was being dramatically transformed. The nation’s first federally-subsidized public housing was being built. Immigration from Europe, once the neighborhood’s lifeblood, had been cut off by restrictive laws, though new laws granting citizenship to residents of Puerto Rico precipitated the beginnings of what would, in the post-WWII years, become a massive migration of residents from the island to this neighborhood. Tenements were being demolished to make way for widened streets and new subway lines running throughout the neighborhood. And a new, innovative park was being planned for this poor, immigrant neighborhood. 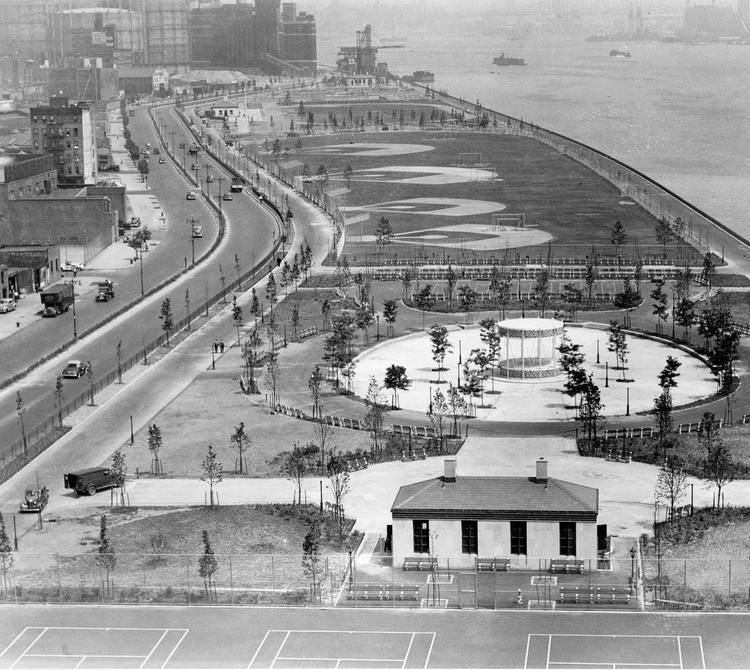 East River Park, shortly after its opening in 1939. Photo: nycurbanism

One of the most dramatic and lasting transformations of the neighborhood took place on July 27, 1939, when the first sections of the East River Park opened with great fanfare at an event presided over by Robert Moses and Mayor La Guardia.

The roughly 50-acre, 1.5 mile-long park, which stretches from 12th to Montgomery Streets, has served generations of locals. But after 80 years, it’s future is uncertain, as the City has decided to protect Lower Manhattan from rising sea levels and flooding by demolishing the current park and rebuilding it ten feet higher.

East River Park was conceived by Robert Moses in the 1930s as the East River Drive (renamed the Franklin Delano Roosevelt Drive in 1945) was built. While Moses enjoys a reputation as a callous, car-centric destroyer of neighborhoods, he was also responsible for building tens of thousands of acres of parks and beaches in New York City and surrounding areas. 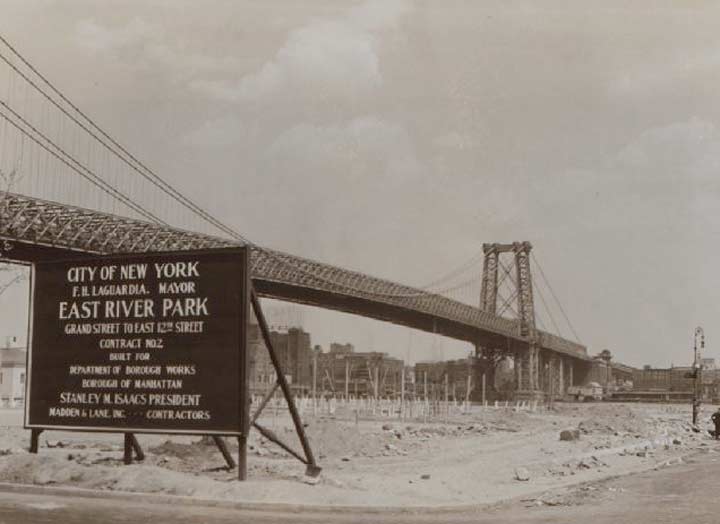 East River Park was built on landfill, replacing an industrial area of warehouses and piers that largely served the coal and lumber industries. This shoreline transformation to parkland was the first of its kind in New York City, preceding Hudson River Park, Brooklyn Bridge Park, and others by many decades.

Grand Street Ferry House Ca. 1929, was located on Grand Street at the East River. Ferry use declined after the opening of the Williamsburg Bridge and this building was demolished to make way for the park. Image via NYPL.

As reported by the NY Times on July 27, 1939, “The park to be opened today has tennis courts, wading pools, fields for football, baseball, field hockey, softball and soccer. There are also volley ball, basketball, handball, shuffleboard, hand tennis, paddle tennis, and horseshoe-pitching courts. A roller-skating rink will be frozen over for ice skating in winter, and an open-air dance floor will be similarly concerted in cold weather.”

East River Park is the largest park in Manhattan south of Central Park, and must have been a profound and welcome change for the surrounding residents. I could only imagine my 11-year-old grandfather in July, 1939, living in a tenement at 48 Pitt Street, having a huge new park open in his backyard at a time when there were very few parks and open spaces in lower Manhattan. The thousands of residents moving from overcrowded tenements to the new low-income housing developments such as Vladeck Houses (opened 1940), and Riis and Lillian Wald Houses (opened 1949), must have loved this new community amenity. 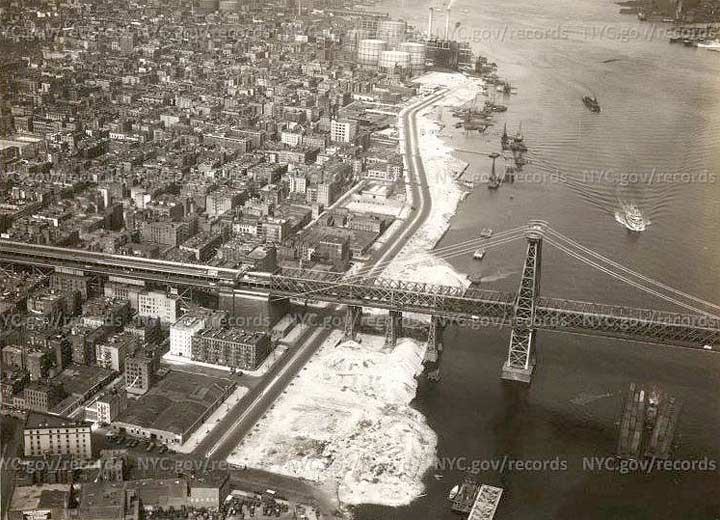 The park has undergone some change over the years. The amphitheater was abandoned from 1973 to 2001, but has been brought back to life, regularly hosting performances. A renovation of the park’s fields was completed in the mid-1990s. Its name was changed in 2001 to the John V. Lindsay East River Park, but it is still most commonly referred to as just East River Park. A planned renovation of the promenade began in 2001 but quickly ran over budget and overschedule, finally reopening fully in 2011.

On October 29, 2012, Hurricane Sandy caused extensive flooding throughout the Lower East Side and East Village. To protect the area from rising sea levels and future flooding, the City developed a $760 million plan with federal funding and significant community input.

But in the fall of 2018, the City abruptly shifted track to a completely different, $1.45 billion plan. The de Blasio administration claimed that this new plan, at double the cost, will shorten the construction timeline (although only by six months) and will be more effective at protecting the park. While the original plan required traffic interruptions and regular lane closures on the FDR Drive, the new plan will not affect traffic at all. According to Parks Department Commissioner Mitchell Silver, the new plan is necessary because unlike passive parks that serve as floodplains, East River Park has structures, lights, and synthetic turf, which will not absorb floodwaters. It would require additional costly repairs in the event of future flooding.

The beloved Seal Park by artist G. Augustine Lynas will be demolished. It has been ignored in the new plan and will not be rebuilt.

Bye guys! There are no plans to incorporate Seal Park into the new park.

All the trees, many dating back 80 years to when the park was built and many of which were harmed during Sandy, will be cut down. Newly planted trees will not reach the height of the current canopy until around the year 2100.

The only holdout seems to be the former Marine Engine Co. 66 Fireboat House, built in 1941 and now home to the Lower East Side Ecology Center (LESEC). This structure will likely be preserved as part of the new park but left unprotected to flooding. The LESEC’s future is uncertain. 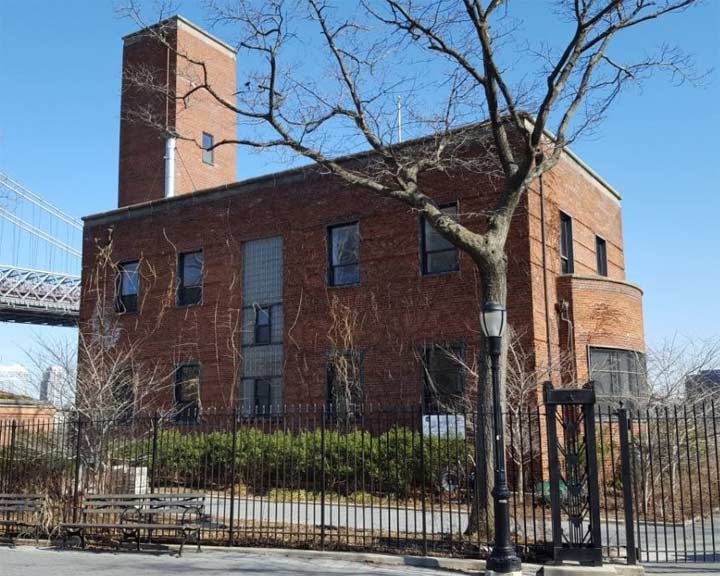 Firehboat House, home of the Lower East Side Ecology Center. Image via forgotten-ny.com

There has been considerable opposition to the plan from some local residents and elected officials, while others have called for an outside panel of experts to weigh in. Some say that the height increase does not go far enough to protect the neighborhood, as this plan only seeks to protect the area against anticipated sea level rise through 2050. Some have asked for the demolition and reconstruction of the park to take part in phases to allow at least some community access to the park during the next several years. These options are unlikely to happen. The City has refused to delay the ULURP process and Deputy Commissioner of Design and Construction Jamie Torres-Springer recently told Gothamist “we came to a conclusion that we can’t deliver the project without a full closure of the park.”

Part of the City’s new plan showing a rebuilt ampitheater

Congressmembers Maloney and Velazquez, State Senators Kavanagh and Hoylman, and Assemblymember Epstein and Niou all have expressed major concerns with the new plan. They have raised a number of issues including the massively increased cost, park alienation, and the lack of consideration for community engagement.

Some activists have placed RIP banners on the park’s trees.

While the City pushes this project forward and the community pushes back, the final decision on the plan will ultimately come down to Councilmember Carlina Rivera, due to the New York City Council’s custom of deferring to its local member. Please click here for more information on the plan to rebuild the park as part of the East Side Coastal Resiliency Project.

One comment on “The East River Park’s Past and Future”