In Death, As In Life, Marcel Duchamp Left Mystery

Marcel Duchamp with one of his readymades. (Courtesy: youtube.com)

Marcel Duchamp was born in France on July 28, 1887 and died on October 2, 1968. He was trained as a painter in Paris until 1905, and spent much of his adult life living in Paris and New York City. He moved to Greenwich Village, not because of the artistic milieu, but to be near the Marshall Chess Club. And when he died in 1968, he left a big, beautiful mystery in his studio at 80 East 11th Street.

Marcel Duchamp with one of his readymades. (Courtesy: youtube.com)

In his insistence that art should be driven by ideas above all, Duchamp is generally considered to be the progenitor of conceptual art. He refused to follow a conventional artistic path and disdained repetition, which accounts for the relatively small number of works he produced during his career. After his brief creative period, Duchamp was content to let others develop the themes he had originated; his influence was crucial to the development of surrealism, Dada, and pop art.

Duchamp’s contempt for convention is reflected in his involvement with the “Arch Conspirators.” In January of 1917, Duchamp and a group of fellow artists (including poet Gertrude Drick; painter John Sloan; and Provincetown Playhouse actors Russell Mann, Betty Turner, and Charles Ellis) entered the inside of the Washington Square Arch’s staircase through an unlocked door, climbed to the top of the arch, and declared liberation for the “Free and Independent Republic of Washington Square” with the intent of having a neighborhood free from mainstream convention. The Daily Plant, the paper of the City’s Parks Department, wrote: “These six so-called ‘Arch Conspirators’ then spread out blankets, hung Chinese lanterns, tied red balloons to the arch’s parapet, sipped tea, shot off cap pistols, and conversed until dawn.” (Read more about the Arch Conspiracy here). 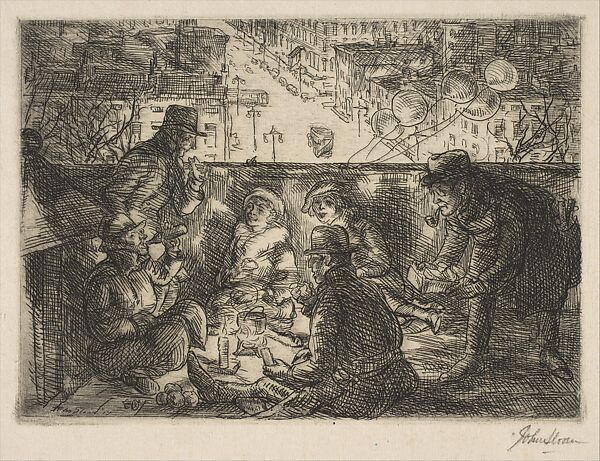 Greenwich Village was a perfect match for Duchamp’s anti-authority stance and eclectic persona, but the neighborhood’s creative vibe was not his main reason for moving here in the 1950s from 210 West 14th Street, where he had lived since 1942. The artist moved to 28 West 10th Street to be near the famed Marshall Chess Club, located at 23 West 10th Street. Duchamp had a lifelong passion for chess, even giving up his art career from 1926 to 1934 to play competitively, and traveling to places like Buenos Aires throughout his life to devote time to his hobby.

He later moved to and lived and maintained a studio at the former St. Denis Hotel at 799 Broadway/80 East 11th Street, one of many buildings in this architecturally and culturally rich area south of Union Square which in the mid-20th century became the center of the art world. In fact it was here that he worked until he died in 1968 on his final artwork, Etant Donnes, a room-filling tableau which the viewer was meant to see through two peepholes at either end (click both links for more info and images).

Village Preservation fought unsuccessfully to save the building from demolition in 2018,  one of many being destroyed in the neighborhood as a result of the tech building boom sweeping through here and the failure of the Mayor and City Councilmember Carlina Rivera and the City Council to demand adequate protections for this area in light of the approval of the Tech Hub on 14th Street.  The building is being replaced with a large glass tech office tower.

Brand new Village Preservation research has uncovered exciting and illuminating information about the significance of the area of Greenwich Village and the East Village south of Union Square, and submitted a 25-page letter to the NYC Landmarks Preservation Commission with the materials, calling for the agency to finally act to extend landmark protections to the area – read it here. With the increased pressure on the area from the beginning of construction on the 14th Street Tech Hub, the recent demolition of the St. Denis Hotel (80 E. 10th Street; 1855) and the completion of the woefully out-of-scale tech office tower at 808 Broadway, the time is now for the city to act to protect this incredibly historically rich but endangered area. You can urge the City to Protect This Vital History and Neighborhood NOW – click here.

In 2018, Village Preservation hosted a program Marcel Duchamp in the Village- 50 Years Later with Artist Serkan Ozkaya in conversation with poet Robert Fitterman at, where else, The Chess Forum.

For twenty years, Marcel Duchamp secretly worked on his final art piece, Étant donnés, in his New York City studio. After his death on October 2nd, 1968, his close friends and the world were stunned to find, hidden in his studio on East 11th Street in the former St. Denis Hotel, the completed Étant donnés, an elaborately detailed and beautifully disturbing room-encompassing tableau, which could be peered at through two peepholes upon entering the room.

In 2014, Serkan Ozkaya imagined Étant donnés as a camera obscura. What if the peepholes weren’t only peepholes? (When has Duchamp’s work only ever been one thing?) What if the peepholes were also meant to project an image? Ozkaya built a scale model to see; to his surprise, the projected image resembled a face. He further secured the studio in which the piece was originally completed. That year for one month the idea was tested in situ and Will Wait was publicly presented at Postmasters Gallery from October 21st through November 25th.

You can see the photos of Serkan Ozkaya and poet Robert Fitterman in conversation about Duchamp’s enigmatic final work and contemporary artists’ response to it.   Ozkaya and Fitterman also curated a collection of works from twenty-six artists and writers that respond—implicitly and explicitly, artistically and scholarly—to Étant donnés in an issue of Public Journal, called PUBLIC ATTENDANT A to Z, available here.

Chess Forum was the perfect venue as chess featured throughout Duchamp’s career, from his early painting Portrait of Chess Players to Reunion, to the performance/chess game he staged with John Cage in 1968.  Duchamp frequently played the game in Greenwich Village.

Today Marcel Duchamp is considered one of greatest artists of his time and one whose attitude toward art and society changed the future of the visual arts and greatly added to the artistic legacy of Greenwich Village. We remember you, Marcel Duchamp!

Want more?  Take the ‘Homes of Great Artists’ tour on our Greenwich Village Historic District 50th Anniversary Map at www.gvshp.org/GVHD50tour. Learn more about the fight to save the neighborhood south of Union Square at www.gvshp.org/savemyneighborhood.