Greenwich Village has long been the home of many of history’s most important social change champions. Now, using Village Preservation’s interactive map of the Greenwich Village Historic District, we can take a virtual walk through the neighborhood to visit the homes of these remarkable individuals. Get to know a nineteenth century abolitionist, an early-twentieth century suffragist, a sculptor who fought the internment of Japanese-Americans during World War II, and many others. Though they span different eras and fight for different causes, the Village’s social change champions are all united by the neighborhood and a common desire for freedom and justice.

Afterwards, expand your knowledge of the Greenwich Village Historic District even more by exploring the more than two dozen other tours showcased in the map, which includes then-and-now images of every one of the over 2,200 buildings in the district, and nearly 1,000 sites of historic significance. 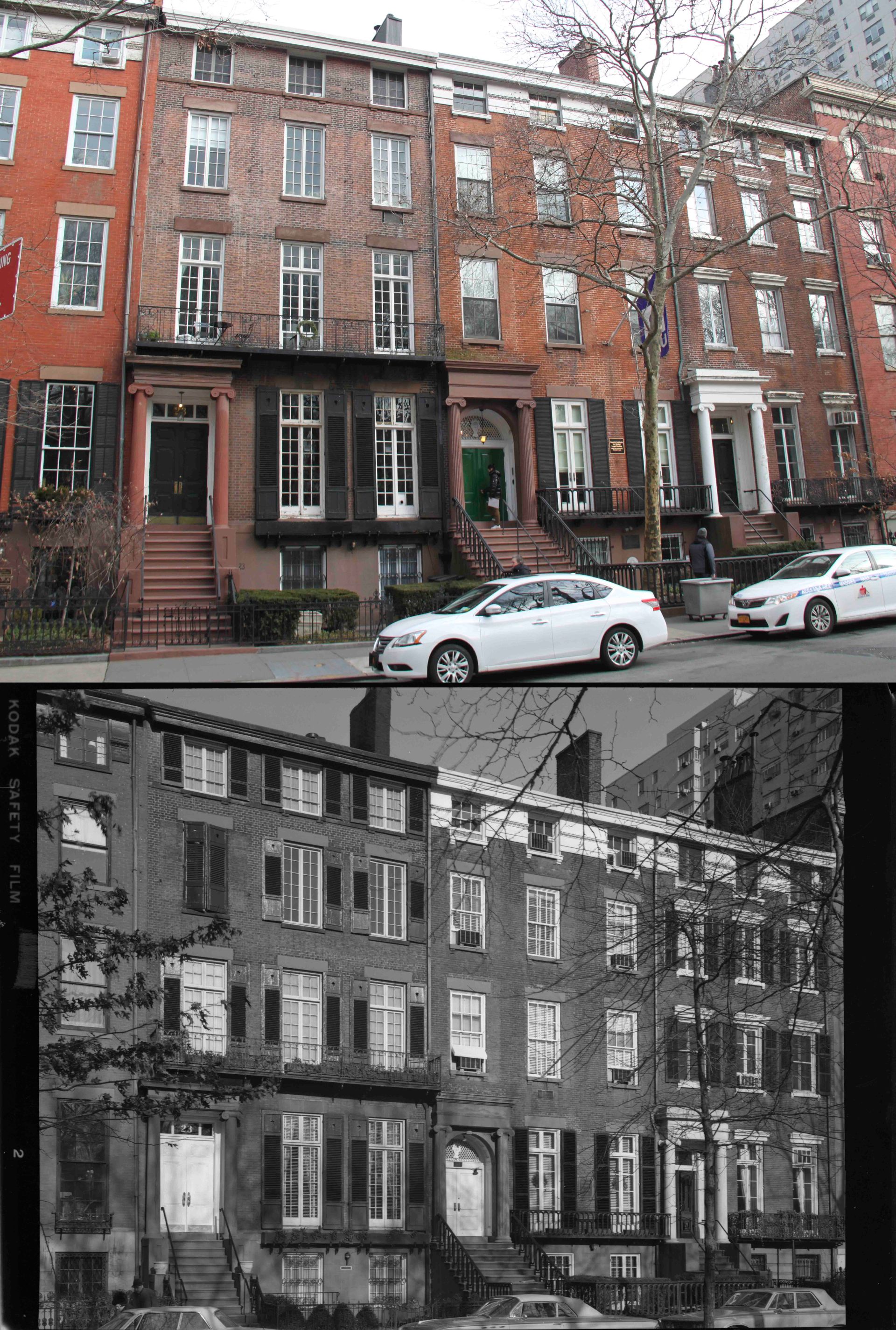 Ardent abolitionist John Jay II lived at 22 Washington Square North with his family. A lawyer and one of the founders of the Republican Party in New York, Jay spent much of his career defending fugitive slaves and promoting abolitionism through his publications and law practice.

Jay’s work as a lawyer focused on defending fugitive slaves, including Henry Long, George Kirk, and two Brazilian slaves. In 1852, in his best-known, nationally-significant case, Lemmon v. New York, Jay served as one of the lawyers for the eight slaves who were ultimately freed by the court. Separately, Jay also successfully campaigned to secure the black congregation of St. Philip’s Church admission to the annual Episcopal Convention, from which it was previously barred.

Jay participated in the Free Soil Party movement, becoming its candidate for the Attorney-General of New York, and during the Civil War he advised Abraham Lincoln and the president’s cabinet. In 1869, Jay was appointed the Minister to Austria, a position he held until 1875. In 1877, he was named by President Hayes to be the chairman of the special commission to investigate Chester A. Arthur’s administration of the New York Custom-House. Then, in 1883, Governor Grover Cleveland selected Jay to be the Republican member of the New York Civil-Service Commission, for which he eventually served as president. Jay also come up with the idea for, and spearheaded the drive to found, the Metropolitan Museum of Art.

On February 28, 1878, Jay’s wife hosted the first meeting of the Thursday Evening Club at the family’s home at 22 Washington Square North, one of the first women’s clubs in New York. 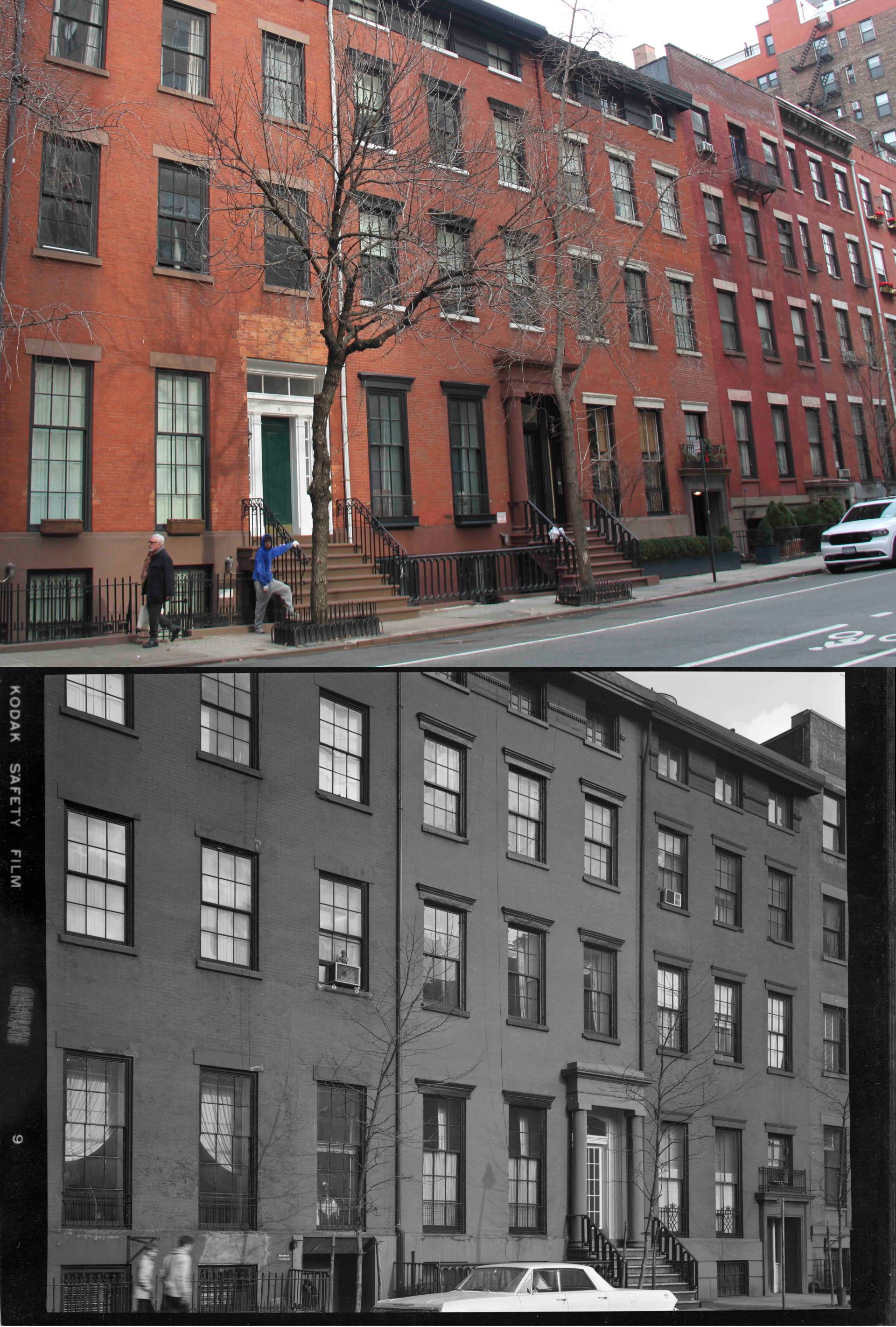 Leading suffragist Inez Milholland was born on August 6th, 1886. Her father, John Milholland, was a reporter and businessman who played a role in the development of the NAACP and the Men’s League for Woman Suffrage. In 1909, Milholland graduated from Vassar College, where she promoted suffrage activism on campus despite the administration’s resistance. That same year, after returning to New York to live with her family at 9 East 9th Street, she interrupted a New York campaign parade for William Howard Taft by speaking through a window with a megaphone on the issue of suffrage. After being rejected from numerous law schools on account of her gender, she finally enrolled in NYU School of Law, earning her degree in 1912. Thereafter she became a labor and children’s rights attorney, journalist, and correspondent. Milholland continued her activism while developing her career, participating in the shirtwaist and laundry worker strikes in New York City, for which she was arrested. Milholland was entrenched in the Village’s bohemian community, and involved in the production of the Greenwich Village-based radical publication The Masses, edited by Max Eastman (also depicted in the Social Change Champions tour).

On March 3rd, 1913, Milholland garnered national attention when she led a suffrage parade the day before Woodrow Wilson was inaugurated. Riding on a white horse wearing a white cape, she looked like a contemporary Joan of Arc. Two years later, in 1915, Milholland travelled on the Ford Peace Ship to participate in a neutral negotiation to stop World War I. Upon her return to the United States, she supported a universal suffrage constitutional amendment, and conducted a speaking tour through the western part of the country in 1916. Also in 1916, she delivered an address at the organizing meeting of the National Women’s Party held that year. During another speech on October 19th, 1916 in Los Angeles, she collapsed and was hospitalized, dying ten weeks later on November 25th, 1916. Fellow suffragist Alice Paul organized a memorial service at the U.S. Capitol building on December 25th, 1916 in honor of Milholland, and another memorial was held at Cooper Union. Apparently, her last words were “President Wilson, how long must women wait for liberty?” 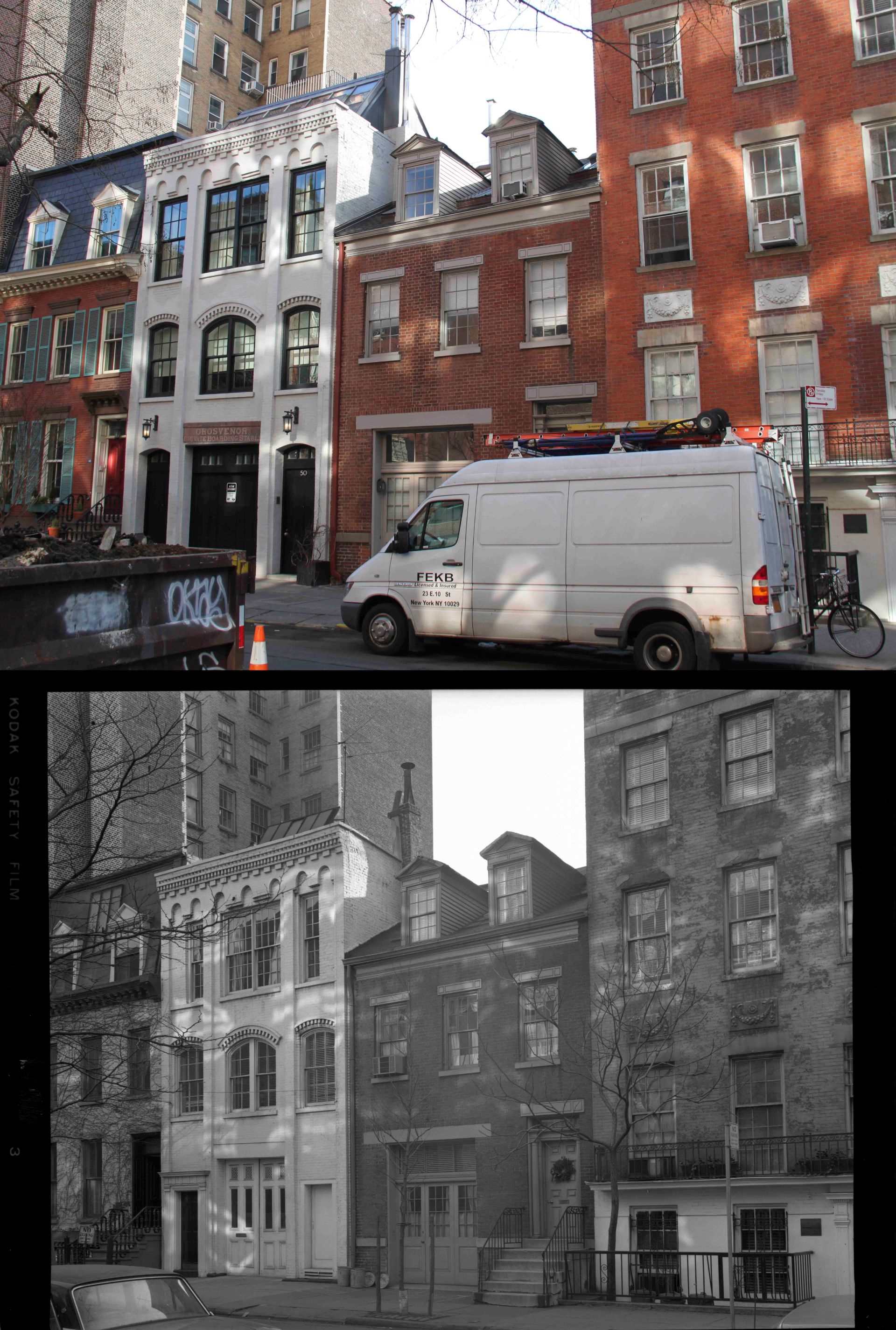 Isamu Noguchi, the son of an Irish-American mother and Japanese father, was one of the 20th century’s most important and critically acclaimed sculptors. He was also an outspoken critic of the internment of Japanese-Americans during World War II, and though he could have avoided internment himself, he was voluntarily interned in a camp for seven months. At the beginning of World War II, Noguchi lived at 52 West 10th Street, and from 1942 until the late 1940s he lived and worked at 33 MacDougal Alley. Many of the buildings on MacDougal Alley were originally constructed as stables beginning in 1833, and as more and more artists moved to the Village in the early 20th century, a number of these buildings were converted to studios. Shortly after Noguchi lived here, however, 33 MacDougal Alley was demolished to make way for the high-rise apartment building at 2 Fifth Avenue

By the time of the attack on Pearl Harbor on December 7, 1941, Noguchi was already a well-known and accomplished sculptor. When anti-Japanese sentiment in the United States escalated following the attack, Noguchi formed the group “Nisei Writers and Artists Mobilization for Democracy” to speak out against the internment of Japanese-Americans, testifying at congressional hearings and lobbying government officials. Despite his and others’ efforts, over one hundred thousand Japanese-Americans were sent to internment camps. Around this time, John Collier, head of the Office of Indian Affairs, persuaded Noguchi to travel to the Poston Internment Camp located on an Indian Reservation in Arizona to promote art in the community. 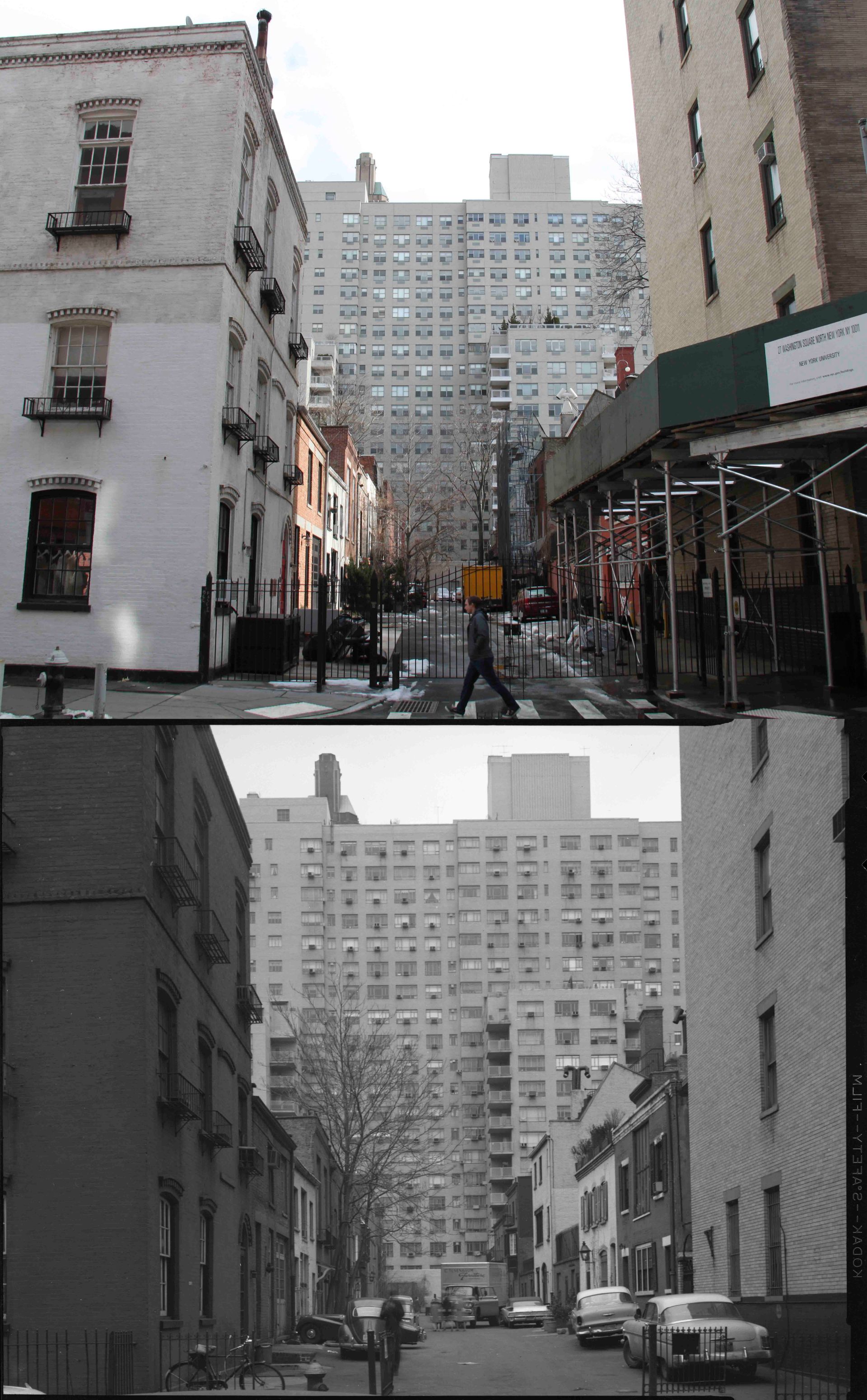 MacDougal Alley. 33 MacDougal Alley was demolished and replaced with the building pictured at the end of the alley, 2 Fifth Avenue.

Noguchi arrived in May 1942, becoming the camp’s only voluntary internee. He found the conditions unbearable, and although he worked on many projects to increase the quality of life for internees, the camp’s authorities made no effort to support him. He was viewed with suspicion by both the internees, who considered him a spy and an outsider, and by the authorities, who considered him a troublesome interloper. Intelligence officers labeled him as a “suspicious person” due to his involvement in activism against internment, and after he left the camp, Noguchi received a deportation order. The FBI accused him of espionage and launched a full investigation which ended only through the intervention of the ACLU (co-founded by Roger Baldwin, yet another Greenwich Village social change champion). Noguchi would later retell his experience in the documentary series The World at War.

Check out our interactive map, Greenwich Village Historic District: Then & Now Photos and Tours to continue the virtual walk, visiting the homes of more social change champions, and so many others!