June is Pride Month, which makes it an especially exciting time to be in the Village. LGBT history is closely tied with our neighborhood and their culture, and throughout the course of this month we’re focusing on four areas of our neighborhood — the West Village, East Village, NoHo, and South Village — to highlight important locations, either long gone or still standing, that join the neighborhood narrative with this diverse history.

Village Preservation also has a long list of online resources and tours that celebrate LGBT history which can be accessed from the comfort of your home.

In the early morning of Saturday, June 28, 1969, dozens of gay men, lesbians, and transgendered people, many of them people of color, resisted a routine police raid on the Stonewall Inn. The riots that followed over the course of three days are widely considered to be the single most important event leading to the modern gay, lesbian, bisexual, and transgender (LGBT) rights movement in the United States. Stonewall Inn was the very first site ever listed on the National Register of Historic Places for its connection to LGBT history in 1999; that application was co-sponsored by Village Preservation.  We also got Stonewall landmarked by the City of New York in 2015, the first site ever designated based upon LGBT history, and was part of a broad coalition which got Stonewall named a U.S. National Monument, the first in the country dedicated to the LGBT rights movement, on June 24, 2016.

Julius’ (159 W. 10th St.)
Located just a block away from the famous Stonewall Inn, Julius’ is often called the oldest continuously operating gay bar in New York City. It was originally established in 1867 and by the 1950’s was attracting gay patrons.

On April 21, 1966, members of the New York chapter of the Mattachine Society staged a “Sip-In” that helped establish the right of homosexuals to be served in licensed premises in New York (the existing rules made gay bars de facto illegal, hence their constant police harassment and their largely being run by the mafia). In 2012 Village Preservation got Julius’ determined eligible for listing on the National Register of Historic Places for its LGBT history, and it was listed in 2016, the 50th anniversary of the Sip-In, upon an application by the NYC LGBT Historic Sites Project. In 2016, Julius’ also received a Village Award from Village Preservation.

St Vincent’s Catholic Medical Center, as seen in 1925. Photo courtesy of the Museum of the City of New York.

St. Vincent’s Catholic Medical Center was originally founded in 1894 and was New York City’s third oldest hospital. In the 1980s, it became one of the first institutions to respond to and treat HIV and AIDS. Housing the first and largest AIDS ward on the east coast, it is often referred to as “ground zero” of the epidemic. The hospital closed in 2010 after going bankrupt and in 2013 its newer buildings were demolished to make way for a new condo development.

A New York City AIDS Memorial (also the winner of this year’s Village Preservation’s Regina Kellerman Award) now stands at the northwest corner of the former St. Vincent’s Triangle, which housed mechanical equipment for the hospital across the street.

The LGBT Community Center has been a home and resource hub for the LGBT community in New York City since its founding in 1983. The center celebrates diversity and advocates for justice and opportunity. The building that houses the community center is a beautiful brick Italianate structure that was originally built in the third quarter of the 19th century as Public School 16. It served as various schools for over a century and was sold to the Lesbian & Gay Services Center, Inc. in 1983. Today, it has grown to become the largest LGBT multi-service organization on the East Coast and the second largest in the world. Other organizations that have been located here (or got their starts here) include SAGE (Senior Action in a Gay Environment), the Metropolitan Community Church (an LGBT congregation), the AIDS activist group ACT UP, and GLAAD (Gay and Lesbian Alliance Against Defamation).

Pyramid Club, 101 Avenue A
Since opening in 1979, the Pyramid Club has also been credited with defining the East Village drag and gay scenes of the 1980s and is known for its politically conscious drag performance art and as a hangout for the counterculture of the neighborhood.

Pyramid Club hosted drag performers such as Lypsinka, Lady Bunny, and RuPaul. It was here that the annual Wigstock festival began in 1984 when a group of the club’s drag queens performed a spontaneous drag show at Tompkins Square Park. In addition to performance art, cabaret, and dancing, many up-and-coming bands also performed here, such as Nirvana and the Red Hot Chili Peppers. Andy Warhol and Debby Harry did a feature on this club for MTV. Madonna appeared at her first AIDS benefit here and Nirvana and the Red Hot Chili Peppers both played their first New York City concerts here. 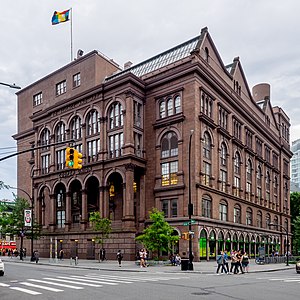 On December 2, 1964, gay rights activist Randy Wicker and four others – including Kay Tobin & probably Craig Rodwell – staged a picket at the front entrance of the Great Hall, protesting a talk conducted by Dr. Paul R. Dince titled “Homosexuality, A Disease.” The previous September, Wicker had organized another action at the U.S. Army Building at Whitehall Street, drawing attention to the military’s discriminatory treatment of the LGBTQ community. Together, these rallies have come to be known as the first public demonstrations for gay rights in the United States.

82 East 4th Street offered clandestine entertainment since the cops raided a “dripping-wet” speakeasy called the Rainbow Inn in 1930. In 1953, club impresario Stephen Franse took over the bar and operated the biggest drag show in America. 35 drag performers made up the revue three times a night, while drag kings served as bouncers and servers. It is said that Frank Sinatra, Kirk Douglas, Elizabeth Taylor, and Judy Garland were patrons of the club. Later, in the 1970s, the bar was taken over and turned into Club 82, serving a new East Village community including Andy Warhol, David Bowie, and Lou Reed, who, it is said, met his lover Rachel there, a transgender woman who inspired a number of his songs about trans women and East Village nightlife generally. The New York Dolls, the Stilettos, and a pre-Blondie Debbie Harry all performed here.

Harvey Milk High School/Hetrick-Martin Institute (2 Astor Place)
Harvey Milk High School (named for the first openly gay man to be elected to public office in the United States) was founded in 1985 to serve as the first public high school in the world for, though not limited to, gay, lesbian, bisexual, and transgender young people.

The school was originally run by the Hetrick-Martin Institute (HMI), an organization that provides support to at-risk youth, especially non-heterosexuals. Since 2002, the school has been administered by the New York City Department of Education, separate from HMI, though they still share space in the same building. HMI also continues to provide the majority of the school’s arts and culture programming. The school moved here in 1993 from its original location on West Street.

NoHo has also served as the home and workplace for several of the late 20th century’s most prominent artists who were also gay.  Pop artist Robert Rauschenberg lived and worked at 381 Lafayette Street, where his namesake foundation is now located.  Just around the corner, photographer Robert Mapplethorpe lived and worked in a loft at 24 Bond Street.

Finally, 676 Broadway was the former studio of artist Keith Haring.  Haring began working there on the 5th floor in 1985, and continued to work there until his death from complications from AIDS in 1990.

Two milestones in the performing arts also witness their birth in NoHo.  In December of 1980, the New York Gay Men’s Chorus had their debut performance in the Great Hall at Cooper Union, an event which helped empower the fledgling group and allow them to become the tour de force they are today.  In 1985, Larry Kramer’s play, “The Normal Heart,” a “fiercely polemical drama about the private and public fallout of the AIDS epidemic,” had its debut at The Public Theater.  The Public Theater is also the recipient of a 2017 Village Award.

In the 1890s, the Black Rabbit, located at 183 Bleecker Street in the building still standing on this site, offered live sex shows as part of its draw. It was closed by the police in 1899, reopened, and was raided again in 1900 by the Society for the Suppression of Vice. The Black Rabbit and the Slide (at 157 MacDougal Street) together represent the earliest known sites of LGBTQ activity in New York in the nineteenth century.

141 Prince Street, former location of the Daughters of Billitis.

Originally founded in San Francisco in 1955, the Daughters of Bilitis was the first lesbian organization in the United States. By 1957, New Yorkers were beginning to comment on the absence of a chapter in New York City. Lorraine Hansberry anonymously wrote a blurb in The Ladder (the organization’s newsletter, which had become the first nationally distributed lesbian publication in 1956) calling for a presence on the East Coast. The following year, Barbara Gittings and Marion Glass founded the New York chapter.

The Ladder, the Daughters of Billitis publication.

The initially tiny chapter shared an office with the gay male organization Mattachine and bounced around the city for the next 13 years. The chapter’s final location was in a loft at 141 Prince Street, in a building that is still standing, one block outside of Greenwich Village. By 1972, The Ladder ran out of funds and folded, however the 14 year run of Daughters of Bilitis inspired the creation of dozens more lesbian and feminist organizations across the country.

The building at 99 Wooster Street was formerly home to the Gay Activists Alliance, one of the most highly influential LGBT groups of the post-Stonewall era. Founded in 1969 by Marty Robinson, Jim Owles, and Arthur Evans, the group was an offshoot of the Gay Liberation Front.

Their location in an abandoned city firehouse at 99 Wooster Street became the first gay and lesbian organizational and social center in New York City. Their “zaps” and face-to-face confrontations were highly influential to other activist and political groups. In 1974 they were targeted by an arson fire and subsequently were forced to cut back on functions. They officially disbanded in 1981.

Village Preservation has compiled a map of sites of significance in the history of civil rights and social justice movements in Greenwich Village, the East Village, and NoHo.  In addition to LGBT history, the map also covers African-American, Women’s, Latinx, and immigrant history, as well as many other locations important to civil rights and social justice movements – view it at www.gvshp.org/civilrightsmap.

We launched an interactive online map of the Greenwich Village Historic District to celebrate its 50th birthday. This great tool allows you to see side-by-side photos of every one of the more than 2,200 buildings in the district in 1969 at the time of designation, and today. It also offers tours of the district’s incredibly rich history, architecture, writers and artists, theaters, houses of worship, and more. You can visit our tour of LGBTQ Sites here.